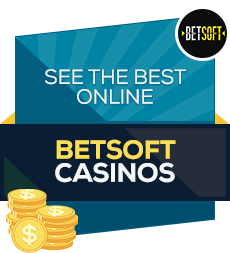 BetSoft Gaming is renowned for developing 3D online slot machines. Filling in the gap left by the now-defunct Sheriff Gaming, BetSoft has gone on to become the leading developer of graphically superior, animated slots. Another one of this provider’s party tricks is its ability to power casinos via software packages and gaming solutions. As a result, many top online casinos are either powered by them or opt to host their games alongside those from other developers.

Our recommended list of the best Betsoft casinos as of December 2022:

There is a common trait amongst almost all slots from this provider. Pop into any of the many BetSoft casinos out there, and you will note that they all feature 3D slot games. These are armed with crisp, animated and cinematic graphics and a handful of special features to boot. On top of that, most slots are fully mobile-friendly, such as the Slots3 series of games.

Over 150 games can be found in this software developer’s portfolio. Most are played over 5 reels, although a handful of classic slots have started to surface over the last few years. The iGaming provider regularly serves up 15 to 30 paylines in their games. While those may be considered the norm, a few titles do go above and beyond this range. Some even dip below 15 lines.

Earlier BetSoft slots tended to feature considerably rigid wagering ranges. Arrival, for instance, features a minimum coin value of $0.02, which means a minimum stake of $0.60 for a 30-line spin. Despite the considerable cost of a turn, the developer covers for this by ensuring that games pay out frequently, and with decent cash prizes.

Gradually, the provider has done away with the high stake, low variance style of gameplay in favor of something more balanced. Many of the newer BetSoft games cost an industry-standard $0.01 per line per spin and feature medium volatility levels.

Games are typically armed with free spin rounds, and most can deliver click and win bonus features. A handful of titles also provide a simple gamble feature, which in many cases either involves a coin toss or a spinning dial. Again, in older slots, wild symbols were by no means a guarantee, often appeared randomly via bonuses. More modern titles do tend to include them, though, and some can appear stacked or even sticky on the reels.

BetSoft slots span several different genres, and these typically include:

Some of the notable titles in its portfolio include:

Some of the brightest and best BetSoft games will appear at most of the leading casinos on the net. While players will often disagree about the developer’s greatest hits, most will say that the following slot games tend to stand out from the pack:

Fruit Zen is about as close to a fruit-themed video slot as you’re going to find. It serves up the same delightful 3D imagery found in other releases from this provider but does away with most of the features save for expanding wilds. A simple 10-line slot, it is ideal for players who want to try their hand at something classic, albeit with modern touches. Fruit Zen regularly appears in free spin bonuses at BetSoft casinos.

The second release in the Sugar Pop series, this is another game where the developer steps out of their comfort zone. The game is played over a 7×7 grid, with players required to land clusters of symbols to bag a win, rather than score wins via paylines. Cascading reel features, medium volatility and a host of unique sweeties (some of which deliver free spins) have made this Candy Crush Saga-style game popular across the net.

The Golden Owl Of Athena

With The Golden Owl of Athena, BetSoft showcases that they can produce serious slots, too, as well as tongue-in-cheek or light-hearted games. Themed on Ancient Greece, the game can deliver an epic 56,200-coin non-progressive win, is played over 10 lines and has ample free spin, wild symbol and randomly triggered goodies to spoil players with.

Arguably one of the most animated and visually impressive games in the provider’s library, Safari Sam is also notable for its features. The older 30-line ($0.02 minimum coin value) setup is present in this game, which delivers random wilds, free spins with 2x multiplier wilds, stacked and collapsible reels, a click and win bonus and a randomly triggered feature. Safari Sam is an excellent example of how the earlier games can be costly but pay dividends when it comes to features.

One of BetSoft’s flagship games is also a progressive jackpot release. Good Mode, Bad Mode and a standard mode can be played in this game, each with its own perks and features. Each mode has its own jackpot prize. Perks in this angel vs demons-themed game include money wheels, click and win bonuses, a flurry of wild goodies with multipliers and much more besides. There is little wonder it has been proven to be a major success.

Seed prizes in jackpot games vary. Some tend to be worth as little as $100 to start off with; others have a seed of thousands of dollars. Most pay out their prizes when they reach just under a hundred thousand dollars. The nature of how they are won varies from game to game. Some slots require symbols to appear on a winning line. Others dish out the goodies at random.

Some of the best jackpot slots from the game producer include:

While over 150 slots can be found in this developer’s library, players will also come across a host of table games, too. Like their reel-based counterparts, these games feature quality graphics and tend to have flexible wagering ranges. Most are based on traditional casino classics and include:

Most BetSoft casinos are considered safe to play at. The developer holds a Class 4 MGA (Malta Gaming Authority) gambling license, as well as licenses from Curacao and several other national gambling commissions. Their games, too, have been certified as safe and fair to play by Gaming Laboratories International (GLI) and are in regulatory compliance with gambling bodies across the globe.

The developer can never fully control what a rogue casino using pirated software can do, though nor could any of their rivals. The actions of blacklisted and rogue sites cannot be pinned on the game producer. Any casino which is licensed and certified to offer BetSoft slots legally will provide its players with fair gaming options, though.

This company has a history stretching back to 1999. However, it wasn’t until the late 2000s that interest in their games began to take hold. Back then, Sheriff Gaming dominated the 3D slots market and was considered their primary rival. However, when its Dutch counterpart fell rather spectacularly from grace in 2012, BetSoft stepped in to fill the void in the market. They haven’t looked back since.

Few rival providers can match the developer’s dedication to 3D slots. Many counterparts seem happy to accept that the realm of 3D slots is BetSoft’s domain. The game producer has a trophy cabinet which is jam-packed with awards and honors for slot development.

It is no surprise that today, almost 20 years after its inception, the company powers over 100 leading casinos, including many household names. BetSoft Gaming has rightfully earned its spot as one of the major software providers around, alongside the likes of Microgaming, Playtech and NetEnt.