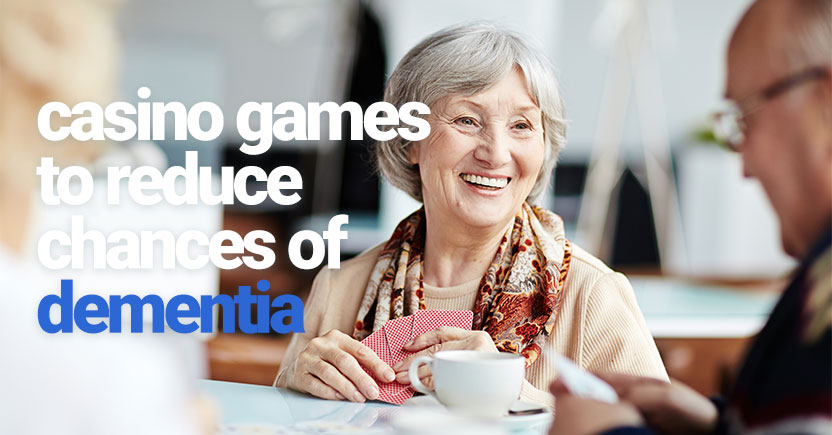 Fragile as man is, our species is extremely resilient and can survive in extreme conditions, mostly through ingenuity and the use of tools. Homo sapiens didn’t start smart, but it certainly had an estimated 200,000 years to evolve. While we have overcome great adversity throughout time, our species still suffers from diseases and specifically pertaining to our minds, which just as our bodies – tend to falter and brittle over time.

However, we have found a way to keep ourselves engaged and, in the ages, we spent figuring out basic laws of physics and creating games to keep existential dread and boredom at bay, we have learned to develop our minds through play. Today, we have all the scientific evidence to make the bold statement that card, dice and board games all contribute to a healthier mind and have been key to our evolution as a species, and specifically our mental faculties.

With this in mind, we will take a look at 4 casino games that stimulate your neutrons and create new connections, which fortifies our cognitive abilities.

The first question we need to ask ourselves is – what is dementia and why are games important to keep it at bay? Dementia, science tells us, is a degenerative disease that leads to a steady decline in our cognitive reasoning. Toxins are released in the brain and the synapses – the connections between neurons – are destroyed.

Yet, games such as blackjack can have an invigorating effect on the brain by training skills and challenging us to retain memory and far more importantly – to make a conscious effort. Smart Brain Aging, a company fighting dementia and other degenerative diseases, was created by John DenBoer whose 85-year-old grandmother developed the disease.

DenBoer then decided to create a series of educating games incorporated in an iOS and Android app that stimulate cognitive abilities. The company registered an about 2.5-year delay in showing the early symptoms of the disease, as well as improving cognitive function by 45 per cent, in relation to what the state of a participant would have been without using Smart Brain Aging.

Similarly, the positive effects of brain training can be properly gauged through gaming. A study carried out by the Glenn Smith, PhD, a neuropsychologist, featured 65-year-old individuals who conducted a number of computerized mind-training. Smith had run similar studies on other occasions, changing test subjects. The control subjects simply watched educational videos, but only the trained group showed significant improvement in their cognitive abilities.

This confirms that games that force us to make a conscious effort are the ones that benefit the brain. Card counting in blackjack is specifically designed to train our memory, our ability to make quick calculations and specifically – to acquire new skills.

Memorizing cards and crunching odds is in the essence of stimulating your brain – but you cannot be a passive participant, as it will take effort.

POKER: COGNITIVE REASONING TO THE BRINK

Maria Konnikova is one of the most entertaining figures in poker. She’s serious-looking, has a smile for an opponent and diligently studies poker day in and day out. Complex activities, such as playing poker, can help you control certain aspects of brain health. Konnikova, a life-long student of big and difficult matters, can attest to this.

Poker is certainly the most challenging card game to play, and with it comes a fair number of skills that need to be nurtured to see results. First, poker again boils down to statistical probability and following through with the game, cards in play and more.

Memorizing the odds of certain outcomes comes with tremendous cognitive requirements and translating rote knowledge into decision-making further complicates the task from re-producing information into internalizing it.

Roulette is the type of casino games that focuses on the amusement value of the experience. While some people have hypothesized that progressive systems can beat the treacherous wheel, quite a few mathematicians have disproved the claim. Yet, there are ways to establish at what point your combinations of inside bets – the ones that yield the best returns – are realistic.

A comprehensive study focusing on decision-making during gambling has found out that the majority of individuals have the ‘illusion of control,’ which often misleads in a way that spells ruinous consequences for individuals.

Then again, roulette also can ask of individuals to demonstrate a practical understanding of mathematical values, probabilities and what a reasonable expectation can be. Of course, roulette is not the most challenging game out there when it comes to cognition, but it definitely stands out as a fairly popular one, which makes it worth including.

SIC BO: TAKE A CHANCE ON THE DICE

In the dusty corners of most casinos, you will find Sic Bo – a game where throwing dice is the apex point of each round. Yet, there is a lot of calculation that can be considered. Sic Bo is a game purely of chance, but there are theoretical values that you can use as guidance to see if an outcome is more likely than another.

Probability on particular outcomes in Sic Bo can vary between 4% to 12% and the house edge is usually around 8.33% in the best possible scenarios whereas some casinos may prove a more of a challenge to overcome.

In each case, there will be a fair bit of a mental stimulus involved. Sic Bo, however, is the least cognitive-based game, so you need to factor this and consider the illusion of control. At the same time, every form of cognitive engagement is designed to help stimulate neurons and build new connections that ultimately boost the brain’s ability to stave off degenerative diseases.

Ultimately, casino games are just one of the ways to keep your mind exercised. Physical exercise is equally important. Not least of all, your genetic predisposition to such diseases cannot be overcome, so understanding this is of equally importance.