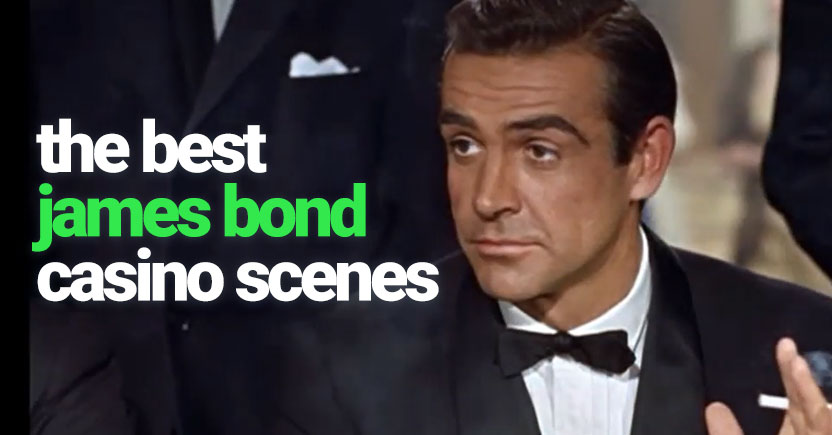 He often saves the day, but James Bond didn’t insist on the job. It’s just what he does best. The legendary MI6 agent has gained international recognition that one cannot help but wonder, why would he so unwisely identify himself as 007 to anyone happy to ask?

Yet, James Bond courtship with danger has immortalized him, like Achilles did in his pursuit of eternal memory. While true that Mr. Bond undergoes quite a few challenges against villains hell-bent on destroying him, some of the best moments in the entire cinematic library are spent in various casinos.

Throughout the multiple iterations of the James Bond franchise, the debonair agent has bested villains in to-the-death clashes as well as at the casino tables. Today, we rank those memorable casino scenes for your reading pleasure.

Daniel Craig’s James Bond must be one of the absolute best and the set-up of the movie attests to that. For fans of casino and poker action, the movie definitely lives up to its name. In this flick, Daniel Craig’s Bond offers to take on one of the world’s most dangerous terrorists in a game of Texas Hold’em.

Le Chiffre is participating in a high-stakes game of Texas Hold’em in Monaco in a bid to secure funds for his terrorist organization. Yet, he needs to play past James Bond himself who has been aching for new and inventive ways to prove how clever he is.

Ego plays a big part in Agent 007’s character, but his overconfidence doesn’t mislead him. Not even after Le Chiffre spikes his drink with poison or sends a swordsman to cut him in half does Bond gives up.

Naturally, Bond comes very close to losing, but CIA agent Felix Leiter buys him in as Le Chiffre is simply not the man to let loose with millions to fund terrorism. This time, Bond’s intuition doesn’t fail him and he ends up winning with a Straight Flush to the bitter disappointment of Le Chiffre, who decides to settle matters in a more physical manner.

Shaun Connery’s iconic role in Diamonds Are Forever goes beyond the lust for shiny objects. MI6’s top-man is dispatched to take on one of his sworn nemesis, Ernst Stavro Blofeld.

And so, James Bond decides not to play cards, but roll the dices in a game of Craps. With the tempting Lana Wood’s Plenty O’Toole by his side, the movie will have you glued to the screen.

Mr. Bond’s grasp of Craps seems just as strong as that of Texas Hold’em, and he quickly turns a seemingly errant wager into a $10,000 win, which he readily splits with the seductive Miss O’Toole.

Well, Mr. Bond may not be a big fan of Craps, that much we know, but in Diamonds Are Forever, he proves himself a dab hand at yet another popular casino game.

Dr. No is certainly one of the most iconic villains in any of the bond movies. Yet, before James Bond can save the day, and very possibly the world, he has to prove himself an adept player at Baccarat.

In Dr. No, 007 sits down for a game of Chemin de Fer, one of the most popular Baccarat games, specific to Europe and Macau.

The movie is not only important as it exemplifies MI6’s top agent skill at a popular casino game, but it also serves as the defining moment for the entire franchise, as he utters the iconic phrase ‘Bond. James Bond.’

We have always been amazed at the indiscretion exercised by Mr. Bond.

Yet, Dr. No is not the only time Mr. Bond will take his chances with the Baccarat tables. In Goldeneye, the daredevil of a secret agent is back and this time Pierce Brosnan has the lead. 007 travels to Casino de Monte Carlo in Monaco where he crosses paths with Xenia Onatopp, a Russian intelligence agent.

The pair decide to postpone drawing guns on one another and sit at the table for an intense game of Baccarat instead. Always a friendly solution in the apex of the Cold War.

Have you ever wondered why James Bond plays so much Baccarat? Well, as it turns out it’s Ian Fleming’s famous card game. True to his creator’s character, 007, will join a high stakes game against Emilio Largo, a wanted man and an evildoer who threatens peace in the world – as much as it exists.

And so, Mr. Bond decides to take Largo down a notch by first defeating him at a game of Chemin de Fer. Thunderball is also a precursor to Casino Royale, the only difference being that Agent 007 never has to suffer at the hands of the villain in this earlier iteration of the franchise.

Skyfall deserves a mention. Through the prism of modern cinema, Macau’s the Floating Dragon Casino is a feast for the eyes. While Daniel Craig’s 007 won’t really compete with villains at the Baccarat or Texas Hold’em tables, the scene is absolutely breath-taking with hundreds of lanterns floating and lighting up the sky above the Dragon Casino.

Mr. Bond has travelled far and could as well be out of his debt venturing into the Asian gaming hub without backup. For once, Macau definitely doesn’t take fondly to anyone meddling in its domestic affairs, so Mr. Bond has to watch out.

Other Casino Scenes in the Bond Franchise

The James Bond franchise is full of many memorable moments, one-liners and action-packed scenes. Yet, casinos continue to be a persisting motif all throughout the decades of cinematography. Casinos are featured in Octopussy, The Man With The Golden Gun, On Her Majesty’s Secret Service and so on. 007 will always have a weakness for a quick game of chance.

When you think of it, his entire professional life is about taking chances and trying to come up on top of difficult situations.