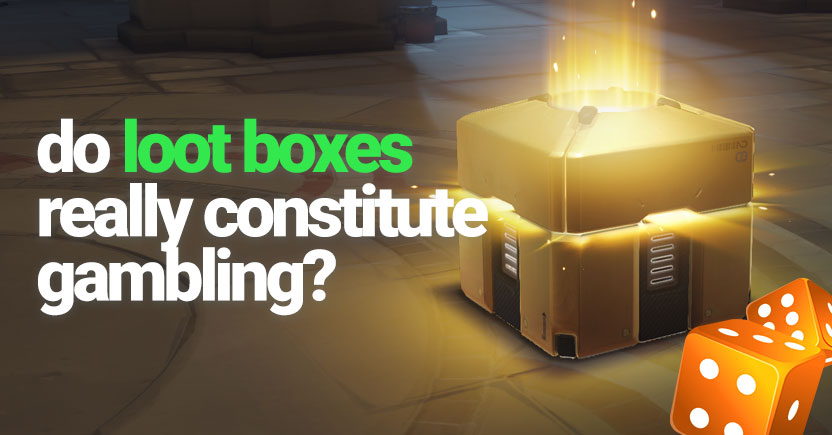 If you’ve been paying keen attention to the news over the last year or so, you will have heard about the “scandal” regarding loot boxes and crates. Apparently – if you believe the word of some people – loot crates are akin to gambling. This has caused a massive debate, with arguments for and against on both sides. What are loot crates, though, and how can something which is predominantly associated with video games possibly be linked with gambling? It is time that this bag of snakes was straightened out.

OPENING LOOT BOXES AND PEERING INSIDE

Video games are more popular than ever before. The advent of online gaming sees hundreds of millions of players from across the globe each year go head-to-head in their favourite online games. That concept alone is impressive. However, a handful of games (usually the most popular ones) have some added features which you can acquire if you are prepared to pay a price. Such features might involve better players in football games, more powerful and devastating weapons in shoot ‘em ups, and enhanced abilities in RPG (role-playing game) titles.

Unlike DLC (downloadable content) which typically sees players able to pay for specific upgrades directly, loot crates are essentially a lucky bag. You have absolutely no idea what you’re going to get out of them. Purchasing one could see you land the best upgrades of all time, or virtually the same gear, if not worse, than you already have.

By not guaranteeing players specific upgrades when they purchase them, many are likening loot crates to lottery games. It doesn’t help that video games are already hugely addictive. When players complain about losing £1,000 a year in the hope of bagging better upgrades, people take notice.

We should not make the mistake of assuming everything that involves gameplay and is addictive is gambling related, though.

Not every player is shelling out a grand a year on random upgrades, and not everybody is dissatisfied with what comes out of these lucky dips.

IS THERE AN ARGUMENT FOR LOOT CRATES?

The funny thing about this scenario is that we’ve seen it before, and you have, too. Ever since the 1960s, children have been collecting trading cards and stickers. My own childhood involved snapping up football stickers to complete an album.

You got six stickers for 25p, and they were assigned at random, too.

Some kids bought hundreds of packets and others bought just a few – it is what we did, and it was part of our childhood. Nobody ever claimed that this was gambling.

Perhaps trading cards are a better parallel? The current situation with loot crates is no different from buying a deck of Top Trump cards, or any of the countless fantasy and dragon-themed cards that players use to do battle against one another with. Remember Pokémon cards? This craze was strikingly like today’s loot crates, in that you bought random packs to boost your chances of beating friends. More importantly, parents were happy to buy them for their children. These were the in-thing just a decade ago.

Why should they be treated any differently to stickers or trading cards?

From this angle, it seems that there is a case to be made for loot crates, and any similarity with actual gambling is purely coincidental.

A HOTLY DEBATED AND CONTROVERSIAL TOPIC

We’re not stupid. Of course, we can see negative aspects to loot crates. They do encourage players to spend a lot on upgrades. Back in the 90s, if you wanted upgrades, you had to earn them in the game. This practice seems to have gone out of the window so the game developers can make a cheap buck or two. This is a problem, and there is no denying that.

Is it a gambling related one, though? Not really. To liken loot boxes to gambling is, perhaps, a step too far. Gambling isn’t always a game of chance. Many gambling games are games of skill. Those skills have been toned for hours and hours, strategies have been learned and tested, and players are trying to win money, not an insignificant digital trophy or bragging rights amongst friends. It seems that associating loot crates with gambling is an easy way of getting rid of them.

Authorities will complain that children shouldn’t be allowed to purchase loot crates because it is akin to gambling. Some children have even been taking their parents cards (without consent) and using them to sneakily buy hundreds of pounds worth of upgrades. Meanwhile, some parents have also paid for the upgrades themselves for their children.

If children are stealing cards, or parents are purchasing this stuff willingly for their children, then perhaps that is where the problem lies. It seems extraordinarily harsh to punish adult gamers (who can make up their own mind about what to spend money on and when) by eliminating loot crates, because parents don’t understand what they are paying for, or because of the rare case of children stealing bank cards.

The gambling industry has come in for flak from all quarters of late. Many of the changes made by regularity bodies and commissions have certainly improved the sector in areas which needed work. Of course, we’re talking about under-age gambling, identity theft, fraud, wagering requirements, auditing, fair play and more besides. We’ll hold our hands up and say that the gambling industry had problems – and they have been fixed. Loot crates, however, are a gaming industry problem and one the gambling community has been unfairly saddled with.

In 2019, there is a growing tendency for people to shout from the rooftops that they know better than everybody else when they don’t like something. Loot crates are next in line. The script reads, “we don’t like loot crates, so ban them”. Unfortunately, this is precisely what seems to be happening in many places. Loot crates are already outlawed in Belgium. This shouldn’t come as too much of a surprise given the country has amongst the strictest, gambling laws around. While the Belgian Gambling Commission’s case study makes an impressive argument, there is more to this story than meets the eye, though.

Video game companies aren’t the only people out to make a buck with loot crates. Underneath the smoke and mirrors, there may be another reason Belgium has chosen to class loot crates as a form of gambling. If loot crates are “gambling-related material”, then any developer using them in games would be forced to apply for a Belgian gambling license. This is a rather expensive piece of kit and would make a lot of money for the state. If every game had to have a license, think of the revenue the country would receive on a yearly basis. Unsurprisingly, the gaming companies simply pulled loot boxes from their games in Belgium, rather than take the bait.

Like many things in 2019, loot crates are facing a call to be banned, and for the wrong reasons. If you want to see them gone from games because you don’t like the practice of buying upgrades which should (and in some cases used to be) free, fine.

Few would argue against you.

However, to equate loot crates (and thus, Pokémon cards and earlier versions of this phenomenon) as a form of gambling is nonsense.

PAY, PLAY, THEN PREACH – IN THAT ORDER

In 2019, it seems easier for MPs, parents and “anti-gambling groups” to simply call for a ban on something that most of them have never experienced. Not only have they never played with loot crates, but they will barely have read up on them either. Without this kind of experience, what position can they honestly be in to call loot crates a form of gambling?

In the United Kingdom, the argument goes on. For now, there is no clear-cut answer (despite parliamentary debate), and loot crates are still available. Many adult online players are happy for loot crates to exist, even if they would rather win rewards for their in-game actions, rather than purchase them.

In the US the ESRB (Entertainment Software Rating Board) has long since slapped labels on games with in-game purchases and left it at that. The ESRB certainly don’t equate loot crates with gambling. They claim that unlike games of chance, you’re guaranteed to get something for your cash – that makes them different. For many people, equating loot crates to gambling is not only wrong, but it also does a great disservice to the actual art behind skilled gambling.